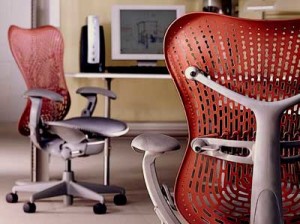 Herman Miller began in 1923 as a manufacturer of traditional residential furniture, became a leader in “modern” furniture in the 1930s and 1940s; developed lasting ties through the 1950s with legendary industrial designers who led them in new directions; transformed the office furniture industry with the first panel system in the 1960s; invented and refined ergonomic work seating in the 1970s, 1980s, and 1990s; reinvented the geometry of systems furniture in 2000, and is today the second largest office furniture company with customers and locations around the world. Their history of employee participation and ownership and technological innovation has long roots and continues to grow.